On our holiday to Les Gets this season we found ourselves arranging both ESF and private lessons for our boys, Lucas (aged 6) and Samuel (aged 4). We’re often asked the question, ‘Which is better?’ so we thought we’d share our experience with you! 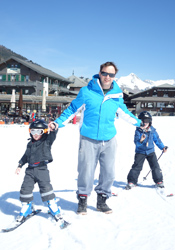 When Lucas was nearly 3 we put him into Club Piou Piou with ESF, and after a time of settling in he started to enjoy it and he even learnt how to ski! This came as a genuine surprise to me, since every day they spent nearly an hour queuing and shuffling along on what can barely be described as a slope, and the other hour warming up and playing in a little creche nearby. But he completed the week and could do the little mini slope all by himself at the end of it, and the creme de la creme? The lovely shiny metal badge which was pinned proudly to his ski jacket afterwards.

Samuel, however, completely rejected the idea of Ski school at a similar age, and wanted no part of the shuffling and queuing. He “Want to go fast Mummy”, and did not care for the short rope lift in the snow garden, but wanted to ride the red bubble. So for that holiday and the next we skied with him ourselves, taking him on blue runs, always between our legs as he couldn’t control himself and wasn’t at all interested in learning how to stop. It was utterly exhausting, but he had a great time and wanted to go faster, ride on chair lifts and generally tear up the baby slopes, while his brother continued earning his badges, sedately following in line behind a school of bibbed 4,5 and 6-year olds.

It’s great to be able to drop Lucas off for 2 hours everyday, and for many parents this is then the time that they can ski themselves. That said, there have been times he’s come back in tears because he’s fallen over, or says that he doesn’t understand what the teacher is saying. For this reason, if money were no object then I think we would pay for him to have private tuition. What we found useful was having a private lesson to top Lucas up half way through the week, so that he was on track for passing his ESF test at the end of the week and earning his badge, and it gave him a day’s break from Ski School. I suppose that because overall his experience is a positive one, and because it gives me 2 hours every day (and is much cheaper too) we’ll continue with ESF for Lucas, with the occasional ‘top-up’ of private tuition. Besides, who else provides such nice badges!

For Samuel though, who would have rejected skiing altogether if we’d insisted on Ski School, having private lessons has made a vast difference. Though he loved skiing with Mummy and Daddy, he wasn’t learning the basics (like how to slow down), so we asked Nathan from Switch Snowsports to take him for a lesson. Samuel was really nervous to start with since he disliked Ski School so much, but Nathan has this wonderful knack of starting the lesson without him even realising it – he just starts skiing with him, and corrects this, adjusts that, provides assistance and steering when he needs it and acts as Samuel’s brakes. Before he knew it, he’d skied away from Mummy, and he couldn’t care less.

So this year, Lucas had a week of ESF Ski School with a private lesson half way through, and Samuel had a private lesson every day with a break half way through the week. At the end of it, they were both excited about their skiing, their progress, and both were asking us when we’re coming back for more skiing! Nathan has become a household name and when people ask Samuel, “So did you go to Ski School?” he replies “No, I don’t like Ski School, I ski with Nathan”.

We have certainly found that ESF and private lessons have their place. Our aim is for our boys to learn how to ski and to love it… so if that means ESF for one, and paying the extra for private lessons for the other, then we’re just happy that Nathan’s not looking to change occupation any time soon!