Another activity that I had the pleasure of trying for the first time this summer was Via Ferrata, which is a type of rock climbing, though not quite as intense! 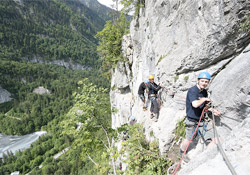 Via ferrata (literally an ‘iron way’) was first created for recreational purposes in mid-19th century Austria, though the origins of the modern via ferrata are attributed to the Italian army. During the First World War via ferrata were constructed in the Italian Dolomites so that troops could move equipment and artillery from one side of the mountain to the other. After the war, the army abandoned the routes and local people took to maintaining them, recognising their potential for attracting tourists to the area.

I was invited to join in with Air Aqua Mountain Adventures along with some of our guests, the lovely Bedi family, who enjoyed it so much the first time when they tried it three years ago, that they simply had to do it again! We were taken to the lovely village of Samoens which is about a 30 min drive from Les Gets.

This is an activity that is definitely not for the fainthearted; the route climbs 150m vertically over a length of 800m incorporating a number of sheer rock faces as you follow a network of rungs, ladders and bridges taking in some stunning views of the river Giffre and the village of Sixt, then across to the Rouget waterfall and the point de Salle in the distance.

As well as the beautifully scenery, I was particularly impressed by Harriet (aged 13) and Charlie (16), who took the whole adventure wonderfully in their stride and weren’t at all phased by the steep ascent.

At no point  did I feel unsafe, as I was always strapped into a harness to the steel rungs which are firmly attached to the rock face. You don’t need to be an experienced climber to give it a go, though a good head for heights is recommended!

2AMA offer a half day Via Ferrata for €45pp.